Head of the Department of Foreign Languages, Translation and Interpreting 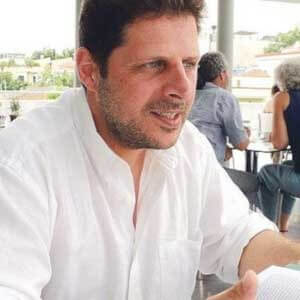 Professor Dr Sotiris Livas is Head of the Department of Foreign Languages, Translation and Interpreting at the Ionian University and Director of the Post-Graduate Programme "Language and Intercultural Communication".

Sotirios S. Livas has been a member of the teaching staff of the same University since 2001. Since 2017, he is Associate Professor of International Law, International Relations and Turkish – Middle Eastern Relations. He also teaches at the University’s post graduate program. He has written and published extensively on the geopolitics of the Middle East, Islam and western notions of democracy, Islamic extremism, immigration and Turkey’s place in the Middle Eastern geopolitical context. He is frequent contributor and book reviewer to international journals, such as the Turkish Review and the Journal of Oriental and African Affairs.

He is a writer of five books and he has translated and edited five more. He has contributed with a chapter (Xenophobia, Alienation, Heterotopias and Cultural Limits: Fictional Boundaries of the Athens Pakistani and Afghani Communities) to Annmarie Profanter – Francis Owtram’s Citizenship in Transition (Cambridge Scholars, 2013). He has taken part in international conferences about Islam and democracy and about Islamic political and religious networks.